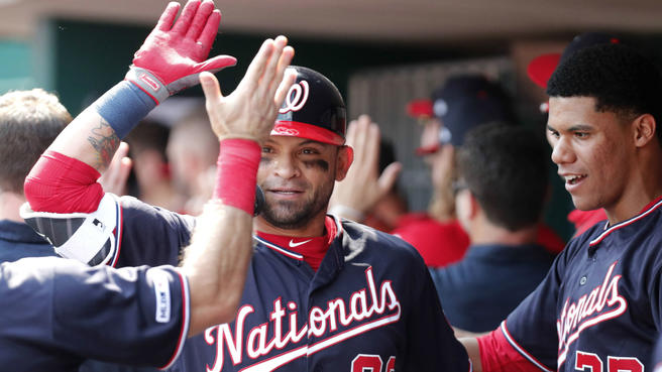 A magical force drove the Washington Nationals come from behind win to be the 2019 World Series champions; it began to reveal itself by mid-October…

If you can believe it, the roar of the crowd from Nats Park could be heard on the Senate side of the Capitol as the Nats scored 7 runs in the first inning against the Cardinals in Game 4 of the NLCS.–tweet from @chadpergram on October 15, 2019.

After losing Bryce Harper to the Phillies in February, few Nationals fans were expecting this.

But, that magic had been set into motion when, shortly after baseball season began, the Giants let go of an outfielder named Gerardo Parra. At the time, Parra told his worried family, “Something good’s coming…it’s gonna be mine. Don’t be sad…that’s baseball…stay with me and believe it.”

And, believe Parra did. He said, “I love my life…I love my teammates…I love, love, love, love,” after arriving in the Capitol city. Parra’s magical enthusiasm began to turn around the Nationals 19-31 record by the end of June.

On a sunny summer day in Detroit, Parra and teammate Fernando Rodney walked to the ballpark and grabbed a few free frames from a promotional table outside the entrance. Each of the translucent sunglasses had different colored lenses: red, yellow, and blue. Parra donned the red ones and wore them for every game after that. He gave the yellow ones to Anibal Sanchez and Rodney wore the blue ones.

The Washington Post reported, “They kept them on for the game, and we were like, ‘All right, we’re taking things up a notch,’ ” reliever Sean Doolittle said. “They helped change the culture in this clubhouse. May was tough for us, and they’ve helped us kind of walk that fine line of playing loose, having fun, taking the field with a smile on your face but also playing hard and staying focused. The second half of the season has been a lot of fun.” Parra said, “Hey, starting today, we will try to bring good luck to the team.’ And we started to win.”

Parra didn’t stop with the sunglasses. He chose a popular children’s song, “Baby Shark,” as his walk up music. His 2-year old daughter gave him the idea. Soon his teammates and Nationals fans were snap-snapping their arms together in unison each time Parra took the field. Fans began wearing shark costumes to Nationals home games.

After winning the National League Championship Series, Nationals manager, Dave Martinez said, “Often, bumpy roads lead to beautiful places.” No one could have said it better. Parra’s faith led him on a bumpy road to the Nationals, his faith spread to his teammates and the team’s newfound joy ultimately buoyed them through several comebacks to win the 2019 World Series.

Hot Stove’s Harold Reynolds would later ask Parra, “this was a very stoic club before you got there…did you see it from the other side and know you were going to be able to change that with your personality?” Parra responded, “When I came to D.C., everything I do, I do it from my heart…I think when you do everything from your heart, something will happen.”

In the movie Bull Durham, Annie Savoy shares a quote she attributes to Walt Whitman: “I see great things in baseball. It’s our game, the American game. It will repair our losses and be a blessing to us.’ You could look it up.”

Parra’s and the Nationals’ 2019 World Series win is the kind of baseball story of which Annie Savoy and Walt Whitman would be proud. It repairs our losses and is a blessing to us—if we’re paying attention to what matters.