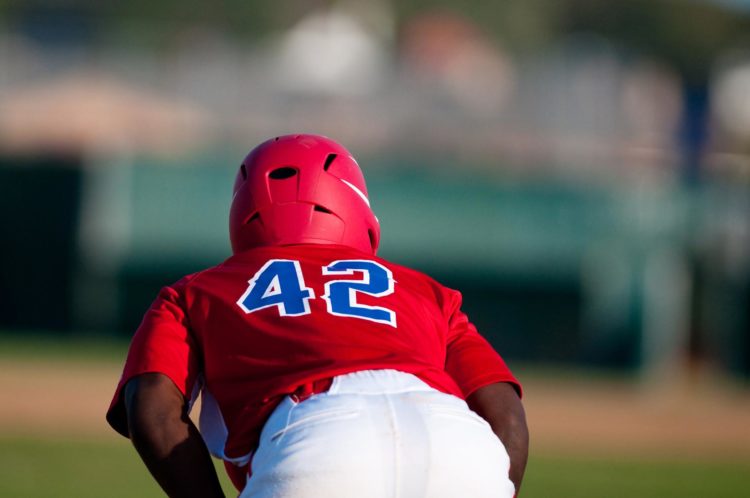 It may seem hard to believe today, but in 1947, his presence on the field with the Brooklyn Dodgers was a major event, marking the first time a black player had played in the majors.

Robinson would go on to win the Rookie of the Year award in 1947, proving he was in the majors to stay. In 1949, he won the MVP award, and finally in 1955 was part of the World Champion Dodgers team that overcame the Yankees to secure their place in history.

He became the first black player to be inducted into the Hall of Fame in 1962, and in 1972 the Dodgers retired his number.

Throughout his career, Robinson had to endure hostile crowds, unwelcoming teammates, and even threats against him and his family. Through it all, he acted with grace and humility, and in fact, his calm demeanor and strength of spirit were part of the reason that Dodgers’ GM Branch Rickey brought him up to the majors. He knew that it would be a difficult journey, and found in Robinson both incredible talent and the ability to endure the racism and hatred that his presence on the field evoked in some people.

No matter what ballpark you head to on Jackie Robinson Day, the players will all be wearing the same number—42. The tradition of wearing 42 on April 15th began when Ken Griffey Jr. wrote to then-commissioner Bud Selig in 1997 and asked if he could wear 42 to honor Robinson on that day.

Selig agreed, and later encouraged more players to wear the number. Since 2009, every player in the majors wears the famous 42 on April 15th, in a special tribute to a baseball legend.

At Dodger Stadium in Los Angeles, a new statue of Jackie Robinson will be unveiled on April 15th. Though the Dodgers may have a new home across the country, the club gave Robinson his shot at the majors, and will always be associated with Robinson’s career.

If you’d like to learn more about Jackie Robinson’s career and faith, then we’d highly recommend you pick up 42 Faith: The Rest of the Jackie Robinson Story by Ed Henry. It chronicles the story of Robinson’s faith and the role it played in helping him break the color barrier and stay calm and collected in the face of so much adversity.

And if you do head to the ballpark for Jackie Robinson Day, make sure that any souvenir or memorabilia you bring home stays safe and sound with a clear and durable case from BallQube!